This is post is regarding my Bangalore - Kuttippuram trip exactly 2 years back, on Jan 24-27, 2016. I started writing this post back then. Like most of the drafts in my blog admin interface, this was also stuck, unfinished. I thought of finishing it today. So here it goes. 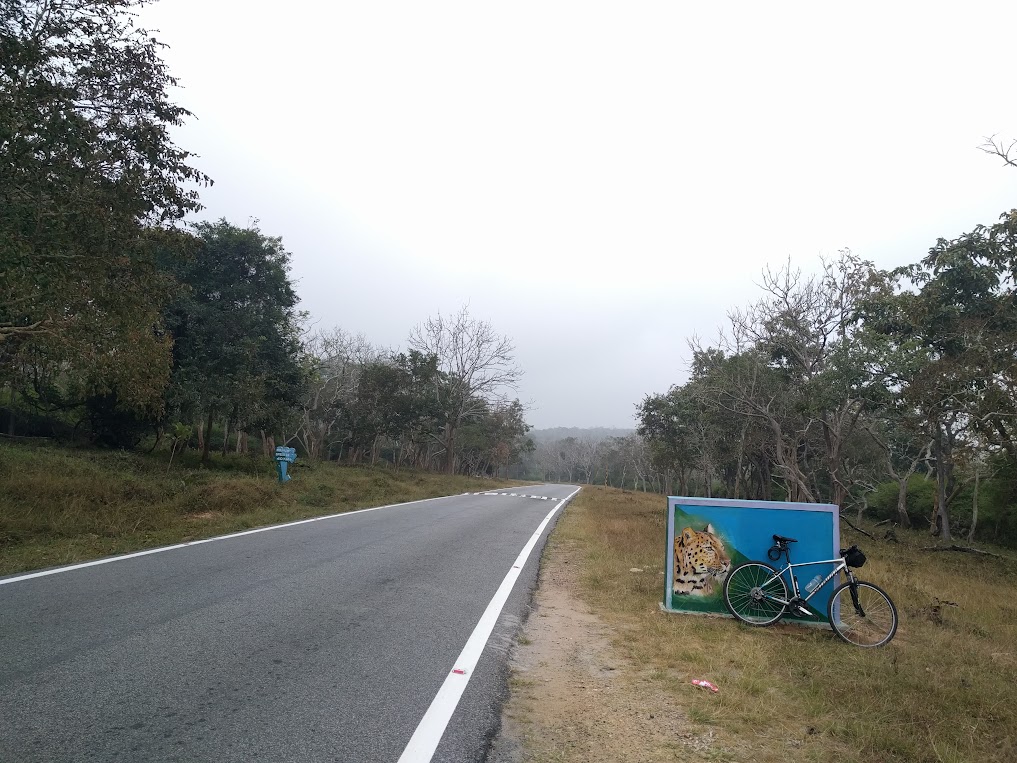 Back in 2016, I got an opportunity to talk in my Alma mater about Android OS development. This happened because our department's head, came to know that I contributed to cyanogen mod, He saw my name in the contributors list. A student group at that time was trying to build android for their academic project.

When I looked at the calendar, I got an idea. My talk was scheduled for 27th Jan, Wednesday. 26th is a holiday because of republic day. So if I take leave from work on Monday, then I can do a bicycle ride towards Kuttipuram, which is almost 400kms from Bangalore.

That sounded scary. I never did ride a multi day ride, that too a long. My longest ride till that day was Bangalore - Mysore - Bangalore, which was approx 280km. I never carried clothes or anything other than puncture kit and spare tubes in my bike.

What if I didn't make it for the event? What if I wasn't allowed to ride through the forest? What if an animal or an elephant chase me?

I stayed indecisive till Friday, 22nd. But finally decided that I'll go ahead with the ride. I gave my laptop bag to Aswathy, who was traveling towards Kozhikode. I told her, I'll collect it from her after I reach Kuttipuram. 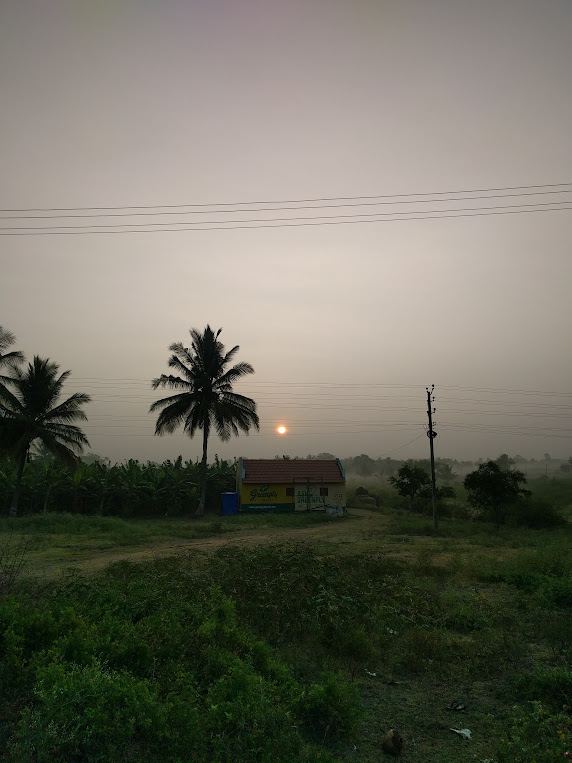 I started at 5.45 in the morning. Within first 10 kilometers, bad luck hit me. I took a wrong turn. I knew it was a wrong turn within meters. I took my phone from my back pocket to confirm. There was a pothole and I fell upside down. This is the first time I'm falling after the time I used to go to my school and first crash of my bike.

I got a small scratch in my hips, nothing serious. There was no one on the road. I stood up and checked my bike. Everything looks fine. I hop on to the saddle and started riding. Immediately I felt something is wrong. I stopped to check my bike again. Oh no, my saddle is bent on the left side. I tried to fix it with the tools I got with me. No luck. I had about 390 kilo meters to cover. Without a proper sitting position, I'm going to hurt some parts of my body. May be I won't even be possible to reach my destination. If I don't reach, what will happen to my talk.

I was confused. Took some time to make a decision, whether to go back and get on a KSRTC, or continue with my ride.

I decided to ride.

I know each and every place in Bangalore - Mysore road, I did ride through this road several times. So there was nothing unexpected there. My plan was to reach there before 12'o clock. I reached Mysore around 11 or 11.30. Even though I reached there before 12, I got traffic in the city area. I was able to cross the city by 1.30. Since I made enough stops, had coffee and tea from several places. I wasn't feeling hungry. I thought I'll have a tender coconut for lunch.

That was a bad decision. Around 2.30, I was completely out of my gas, and there was no restaurant in the vicinity. I some how found a Kerala restaurant near to Nanjangadu around 3'o clock and had meals.

The night before I started my ride, I took a print out of both the routes possible from Gundlupet. My idea was, Wayanad route has less forest, so if I reach Gundlupet around 4'o clock, I'll cross the forest and find a stay in Wayanad, otherwise I'll stop for the day at Gundlupet and ride via Gudalur the next day.

I reached Gundlupet at 5'o clock. Because of my bad decision to skip lunch for some time and lack of tea shops in Mysore - Gundlupet road, I was really tired when I reached there. I didn't have the energy to ride fast in case I came across any animals in the forest. So I decided to stop for the day. Right before Gundlupet I noticed a hotel when I crossed it, after reaching the town, I decided to ride back to the hotel and stay there.

The sleep you get after a long ride is the best you can get. Woke up early in the morning. There is nothing a good night sleep can't fix. I started the day with my usual cappuccino from the popular CCD in Gundlupet. 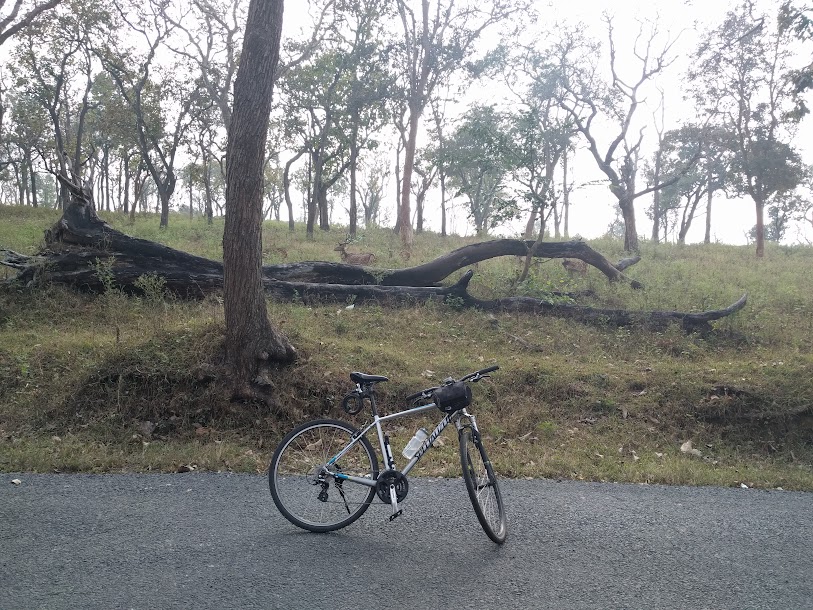 Reached Bandipur forest entrance around 7'o clock. I was expecting Karnataka forest officers to stop me. But they didn't do anything. The only experience I have in this road from a trip I had with my classmates 6-7 years back. Our car got a puncture mid forest and truck drivers scared us a little bit saying they spotted tigers near by.

Yesterday, I didn't take any pictures. But The beauty of this place is such that I stopped here and there and took several pictures. Which was unusual for me till then. (Now I really like taking pictures, especially featuring my bike, but no selfies). May be because it is early morning, there was literally one or two vehicles every 15mins. I was mid jungle and there were several boards saying 'Tiger Crossing' area.

When I reached Tamil Nadu section, forest officers stopped me and said cycling is not allowed inside the forest. They say, it is dangerous, especially a single person. I chit chatted with them for 15 mins, then they allowed me to go.

Tamil Nadu side of the forest is really bad. Plastic everywhere, bad roads.

About 10'o clock I reached the other end of the forest. I was hungry, I had breakfast from the first restaurant I saw. 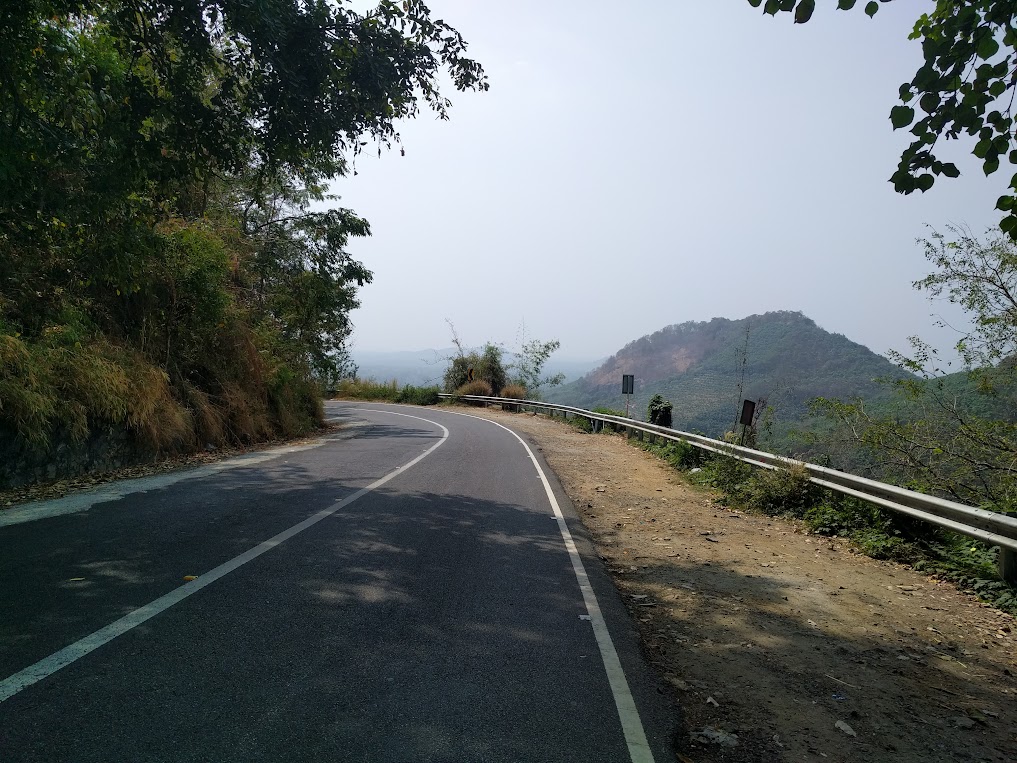 Reached Nadugani at 11.30. The 10-12 kilometers, 1000 meters down hill from there was one of the most enjoyable part of the entire trip.

About 1.30, I reached Nilambur. I was really hungry. I had this awesome chicken dish from there. 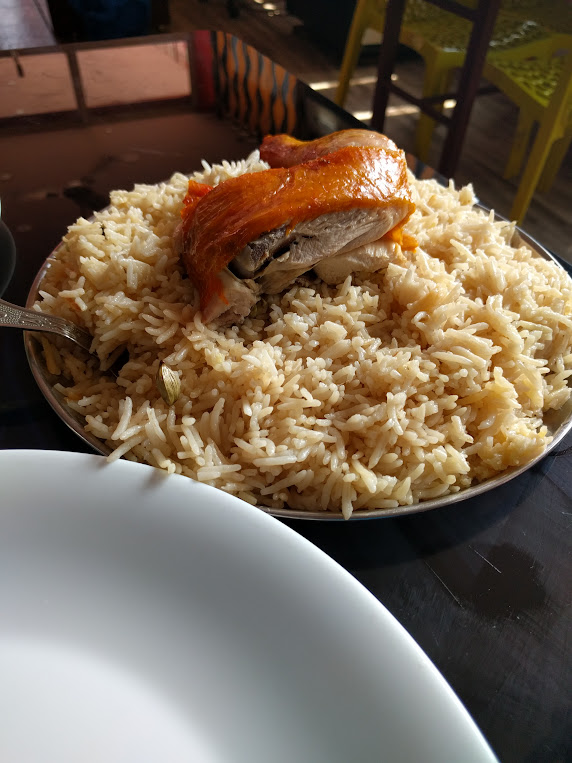 The map print out I took with me had elevation mapped, so that I can pace and save energy. What I found is, the whole data is incorrect in Kerala. There are several climbs along the way to Kuttipuram from Nilambur, which are incorrectly mapped as flat.

Weather was on the higher side in Kerala compared to the bearable Karnataka. On the way to Perinthalmanna, I decided to take a short nap in a bus stop, because of the high temperature in the afternoon.

Even though I was really tired for the last 10 kms, the feeling you get when you finish the ride kept me back on the saddle.

I finished the ride around 6'o clock. I got a room near Kuttipuram Railway station and kept my bike inside the room. 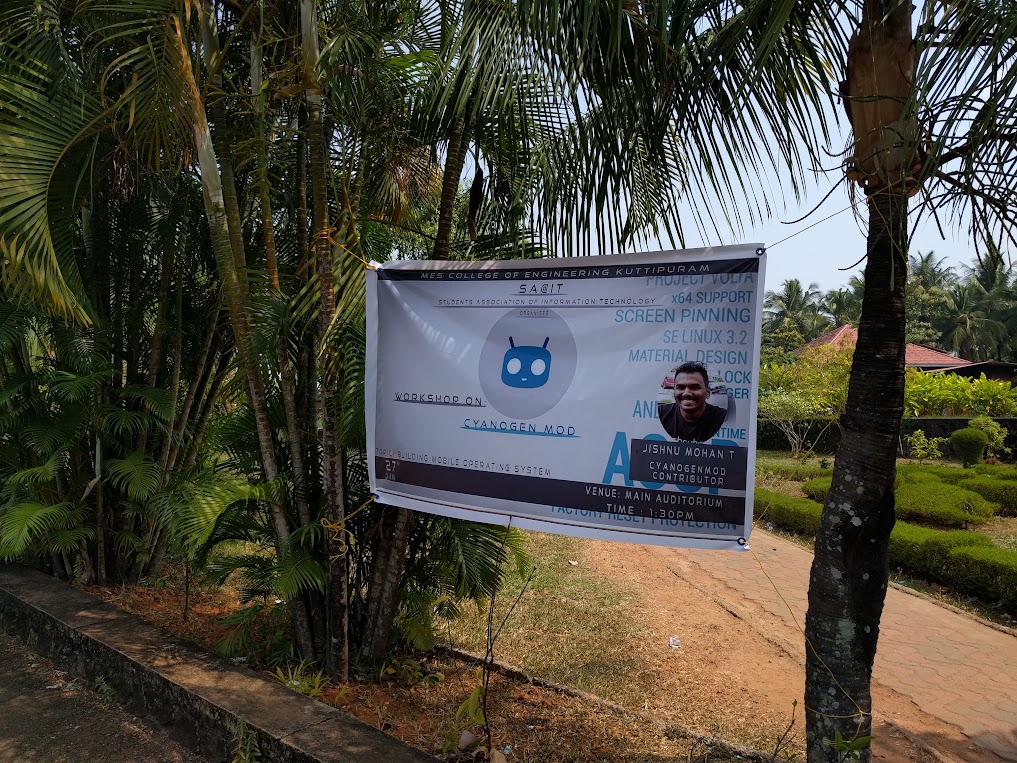 When our HOD, Raju sir contacted me for this I never thought it would be as overwhelming as it was. Because I know that you can't conduct an event in our college's main auditorium unless it is a huge event or an important one. Same with for college principal and other heads of departments to be present.

The function was inaugurated by our college principal and heads of other departments and the entire IT department was there. Till then, I never made a generic public talk, like saying thank you note or something. Not sure how I handled the unexpected situation.

I took a train back to Bangalore and kept my bike in the luggage compartment.

The 5 days I spent for the trip is something I will cherish forever.